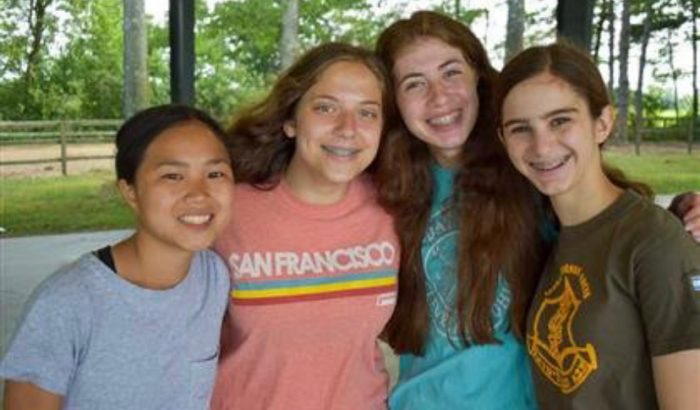 Hailey (second from the left) with her friends at Camp Wise

When I was in 4th and 5th grade, I really wanted to attend Camp Wise because many of my friends were going to be attending for their first or second year. I spent hours reading about camp life on the Camp Wise website –so invested in the idea of attending. But, I never actually ended up going back then. Fast forward to fall 2018 when my friends had just gotten back from camp and were already excitedly talking about their return to camp for their upcoming Solel summer. As I was listening to them speak, I resigned myself to the reality that I had probably lost my opportunity since I hadn’t attended when I was younger. I couldn’t really imagine myself going to camp for this epic Solel summer they were talking about when I had no idea what that meant and hadn’t spent any summers at CW before then. After several long conversations with my family and friends, though, who told me if I really wanted to go, I should take the leap, I went for it. I signed up for camp!

I was a mix of nervous and excited as we neared the start of summer of 2019. I kept assuring myself that I would have an amazing time and everyone would be nice, but I still wasn’t so sure. I was worried that I might be judged for never attending camp before. I was worried no one would want to talk to me since they would all be so close already. I remember feeling all of these feelings the moment I walked up to the drop-off spot, where I received my nametag and walked onto the bus. As I write this now, I am laughing to myself because I truly cannot believe I ever felt that way. The moment we arrived at camp – starting on the bus ride, honestly – I immediately felt welcome and included.

When I arrived at camp, I saw the familiar faces of friends, which helped with my nerves.

In addition, every counselor and camper that came up to me was so friendly, reassuring me this would be an unforgettable three weeks of my life. They were right. Within the first hour at Camp Wise, I knew it was for me. The first night of camp, as we walked to the opening campfire, we were singing “I Want It That Way” by the Backstreet Boys at the top of our lungs, which was already one of my favorite songs. This song became one of our regulars we would belt out at any given moment. When I listen to it now at home, it brings a whole new level of meaning after last summer.

One of the funniest and most memorable evening programs of the summer was called “Partyology”. We played a few really fun games, including “Just Dance”, specifically to the iconic Rasputin dance that ended up being our go-to dance of the summer. I remember laughing so hard, having so much fun with new and old friends, and feeling free. When I went to look back on this night for reference, I was shocked to find out it was only the second night of camp. I remember feeling like I had known my counselors and fellow campers my whole life. Everyone was already looking out for each other, and I never once felt out of place.

All of this led me to feeling confident enough to try new things and step out of my comfort zone during those three weeks. One of my biggest fears is boats and deep water. So, naturally, when Solel was heading down to the lake, I was terrified about the idea of getting on the jet-ski. Not for me! After 20 minutes of encouraging words (and also some begging!), my friends talked me into trying it, at least once, saying they were here for me and cheering me on. The lake staff were an amazing support for me, and I ended up having a blast. So much so that I wound up riding the jet-ski two more times!

Last summer, my first-ever summer at Camp Wise, I had the best summer of my life. Whether it was playing Name That Tune on the Solel bus (shout out to the front of the bus gang), playing cards on the deck, trips to Cincinnati and to Buffalo, Shabbat services, or talking, laughing, and singing together in the yurts, there was never a dull moment. If you had seen me at Solel Havdalah, you probably would have thought I had been going to camp for 8 years because of how much I was crying. I know, I know, it’s a rite of passage for Solel campers to experience this at their Solel Havdalah but the thought of leaving camp, a place I had come to love and feel so much a part of so quickly, was really hard to think about. I wish I had decided to come to camp in my younger years, but last summer taught me that it’s never too late to try new things, jump outside my comfort zone, and trust myself. While I had an amazing time during those three weeks, the impact of camp lasts far beyond last summer. The memories and experiences I carry with me from camp continue to shape me and influence me in meaningful ways. I felt on top of the world at camp and I will never forget the wonderful times Solel 2019 Trip II had together. Thank you to the Solel Trip II 2019 staff and campers for making my first summer spectacular, and thank you to Camp Wise, my new home away from home.

Click here to donate to the philanthropic efforts to support and stabilize Camp Wise’s financial condition at this time. Every donation counts to help ensure we can provide many more life-changing Jewish summers for our campers and staff. Currently, all donations from our community will be matched through the All Together Now matching grant program, made possible through JCamp 180, a program of the Harold Grinspoon Foundation.