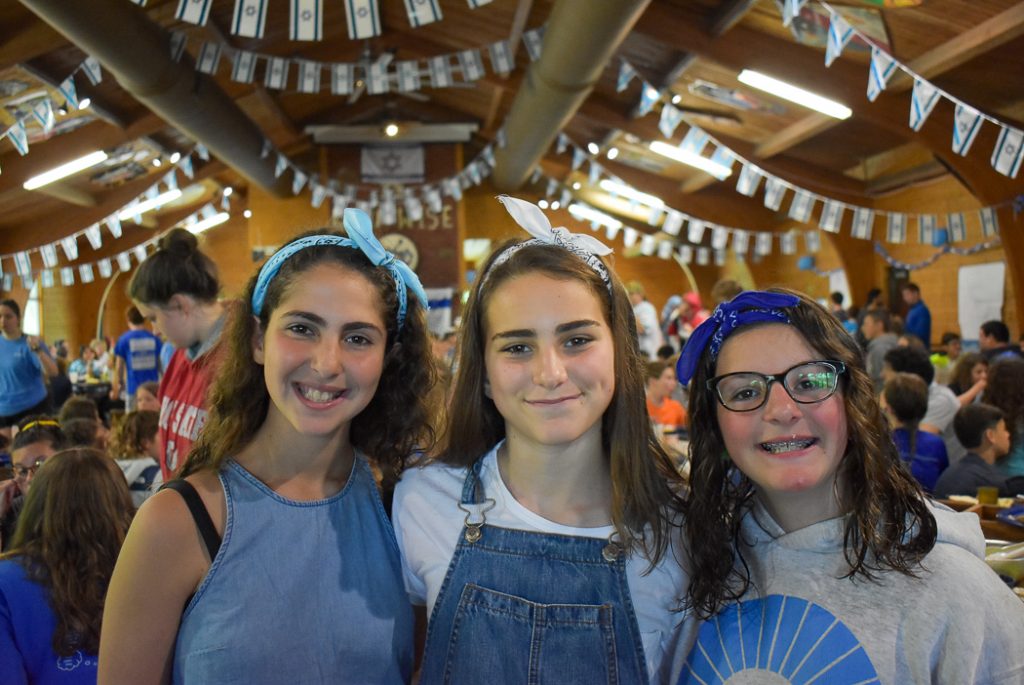 Despite all the rain, this has been quite a busy week at the Home of Happiness! There were adventures to be had here at camp and away. It all started on Sunday when C7 and C8 had a giant sleepover party in the Moadon. Since it was too wet be outside, the girls enjoyed an indoor campfire complete with song and s’mores! As Solel was away on trip for a good part of this week, they didn’t participate in regular chugim (choice activities), but instead got to experience a few special Solel programs led by community guests! The highlight was making shakshuka with Debbie Chessin on Monday! Later in the week, everyone had a chance to leave for trips. Solel took their big 3-day trip down south and visited Kings Island and Mammoth Cave while everyone else took day trips. Chalutzim visited Pioneer Waterland, Ohalim went to Splash Lagoon, and Noar to Cedar Point!

On Thursday, we all celebrated Israel. Even though Yom Ha’atzmut (Israel Independence Day) is typically celebrated in May, we decided that we should also be celebrating it as a camp community. The day was filled with Israeli music at meals, lots of dancing, a special Israeli dinner, and Israel-themed programs in each village. We can’t wait to welcome our teen campers in the Israel Summer Leadership (ILS) program to camp next week. Even though they’ll only be here for a few days before they leave for their 4-week journey in Israel, we’re looking forward to spending as much time with them as possible before they leave!

During this week when learning about B’tzelem Elohim (in the image of god), the focus has been on how we treat others. Rabbi Shana worked with Chalutzim to prepare and lead our camp community in Shabbat. They again began with a compliment battle during Shabbat prep time. This time they highlighted how good it felt to shout compliment to others and how good it felt to lift others up.

In this week’s Torah portion, we read that Moses’ sister Miriam becomes ill, and Moses prays to God on her behalf with the words, “Please God heal her, please.” Moses began a tradition thousands of years ago that we continue today. When someone is ill, we pray and offer them strength and healing, an act of kindness and comfort for one another.

Rabbi Hillel is famous for saying, “If I am not for myself, who will be for me?” We are created B’tzelem Elohim, we are worthy, and we must take care of ourselves. He continued, “If I am only for myself, what am I?” We must treat others with kindness, compassion and respect. They are worthy. And he finished, “If not now, when?” There is no time like the present to start.

We can’t believe we’ve already been at camp for nearly two weeks! On Sunday, we say goodbye to our friends in Rishon. We have had tons of fun introducing them to the Camp Wise Magic and we are looking forward to seeing them all back at The Home of Happiness for the 2020 summer! 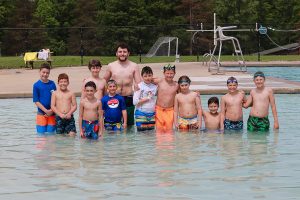 It was a busy week for C1! Some highlights include making their own tie-dye t-shirts at the art shack, visiting the spring in the woods during their teva (nature) activity, and “sneaking out of the cabin” to steal snacks from the supervisors! 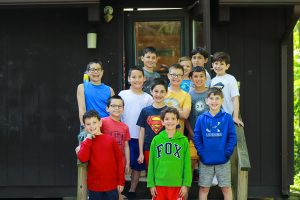 This week the campers of C2 have continued to bond as a group. One of their favorite moments was being led on a hike by one of their very own counselors! 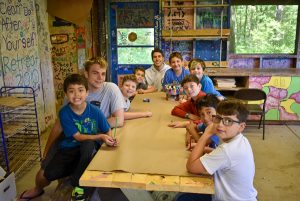 In the cabin of C4 you will find all the campers busy playing cards. With all the games to learn and play there is never a dull moment! A highlight from this week was working together on a “choose your own adventure” story – it ended with a unique story about Martin the Dragon. 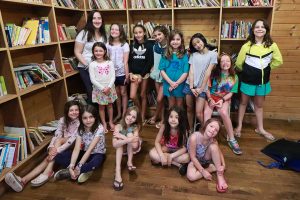 C5 had a blast at the lake this week. Everyone was excited to hop on the back of the Jet Ski and go tubing. As a cabin we had a special invention night evening program where we played mini-games to earn supplies to design new inventions! 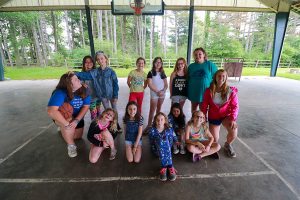 This week C7 celebrated a counselor’s birthday with a special dinner, programming, and lots of surprises. As a cabin we all worked together to try the climbing tower and enjoyed a fun day at Pioneer Waterland where we raced on the slides and relaxed in the lazy river! 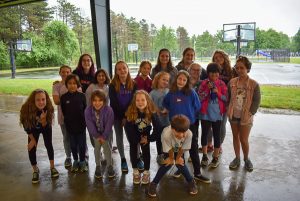 This week we have seen all of our campers come out of their shells. We loved our dance cabin activity where the cabin came up with a cool new dance routine! 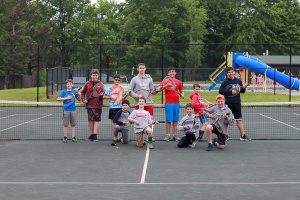 This week we continued our adventure into the land of Wisedom diving deeper into our action-adventure bedtime story. As a cabin O1 has been working together a lot and especially enjoys lacrosse. 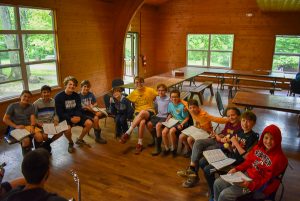 O2 was all about the music this week. From song session cabin activities to evening campfires the cabin really bonded together! 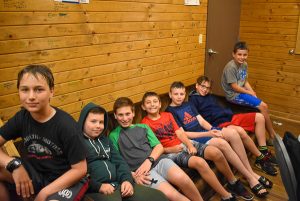 This week O3 had a blast at basketball as they balled out against each other. They also had a great time at Splash Lagoon, most of the cabin tried out every slide! 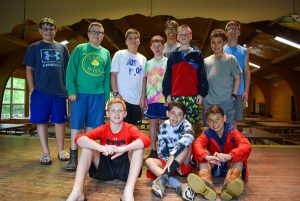 After a week with our Ohio Wildlife pamphlet, a new favorite animal is the deer mouse. Thanks to the pamphlet, we now know that a deer mouse is a mouse that is also a deer, but also a deer that is also a mouse! We also survived the muddy trek to the horse stables, although several shoes fell victim to the mud, experiencing the adventure together brought O5 closer than before. 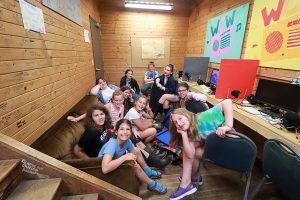 This week O6 tie-dyed which was so much fun! Everyone made great looking shirts and pillowcases! We also did a special activity where the girls took time to write one thing they like about each person in the cabin. It was a great bonding and heartfelt moment. 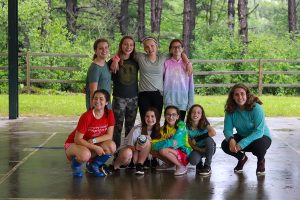 Although it was a rainy week, our girls stayed positive and entertained with cabin bonding, string bracelets and the occasional puddle jumping! O7 campers are really learning what it means to be in Ohalim and are enjoying their new freedoms. 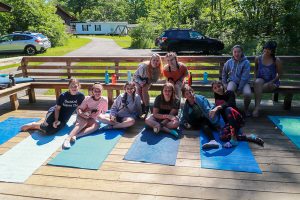 The O8 staff and SITs surprised the girls with horseback riding this week! After blindfolding the campers, we took them on a wacky route around camp that ended at the stables. The cabin also had tie-dye this week; in addition to tie-dyeing their CW shirts they also go to dye an extra item of their choice! 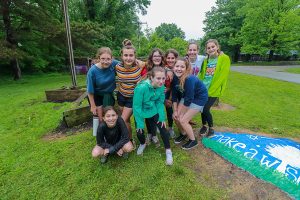 Although the weather hasn’t been ideal, the O9 girls are having an awesome time. In between the rain, we had a chance to get out during a mountain bike cabin activity. It was fun to do something new and exciting as a cabin! 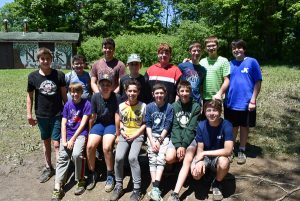 This week one of our bunkmates, Seth, led our cabin in a mediation session before bed. How cool is it that he taught the entire cabin something he learned at yoga?! We also had so much fun at our “Brouhaha” evening program which ended in an epic “mud battle” between all the staff. 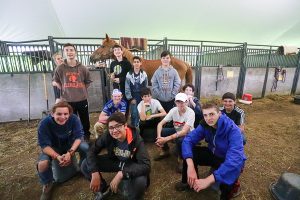 This week we went to the fitness cabin activity with our specialist Jake. We were challenged to do a 4 man press-up and we were the first cabin to complete it and we did it twice with two different groups! 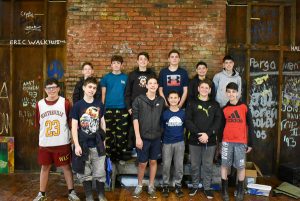 N3 has come together as a strong community in the past few days and have helped support each other when they needed it. We had tons of fun at the Israeli culture activity where we deciphered clues about different cultural traditions in Israel. 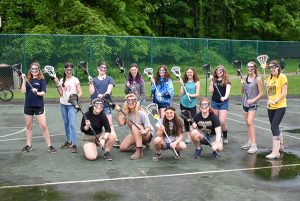 This week N5 had lots of exciting activities including mountain biking and lacrosse. However, their highlight was definitely Leap of Faith on the ropes course. Everyone took part and cheered each other on! Even though it has been rather wet, it hasn’t stopped N5 from having an awesome summer. PS – send more socks! ☺ 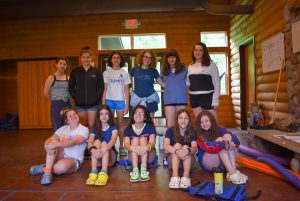 This week N6 started a spa! Everyone was included and had jobs to match their skillset! We also enjoyed our arts and crafts activity where we made jewelry to add to our wardrobes. 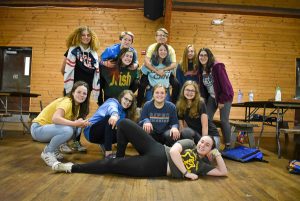 N7 tackled the high ropes course this week. Our cabin visited the leap of faith, vertical playground and lily pads. We’re all high ropes masters now! We’ve also been taking advantage of the rain and turning it into cabin bonding time full of inside jokes, song sessions and nail painting. 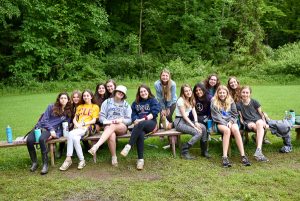 N8 has had an amazing week! The girls became pros at tennis and can all perfectly twirl a racket. Even though it rained this past week, the extra cabin time was exactly what was needed for N8 to bond as a cabin and come together as a family. 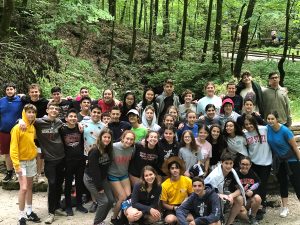 This week, Solel’s newest adventure took us to Cincinnati and Kentucky! On Tuesday we spent the day riding roller coasters and playing games at King’s Island amusement park in Cincinnati. Then, on Wednesday we explored the world’s longest underground cavern, Mammoth Cave, and conquered the high ropes course at the Mega Cavern underground adventure facility. Our journey ended on Thursday at the Cincinnati zoo before heading back to the Home of Happiness. This week has been amazing, watching the kids become instant role models for their Chalutzim buddies was so rewarding! You can really feel the Solel magic in the air as we become more of a family every day!