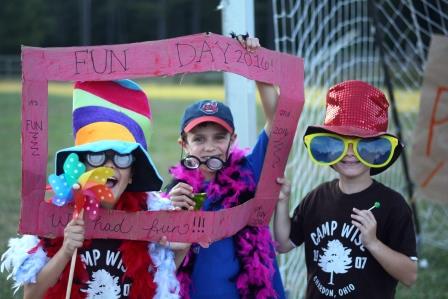 It seemed like with each new day this week our campers were going on new adventures! The week began as we said goodbye to Solel when they boarded the bus for the American Falls and their Buffalo journey. But back at camp we were all busy having a little too much fun of our own at Fun Day 2016; complete with carnival games, cotton candy, and bounce houses! And before the week was at the half way mark, the 9th graders spent their afternoon jet skiing and lounging at Fairport Harbor on Lake Erie while the Ohalim girls got in touch with nature on their overnight in the woods. But the highlight of the week was probably when our judges rode in on horseback to try to save Buzz Lightyear from Zorg to introduce Toy Story Maccabiah! Before we headed into Shabbat, we started one more amazing day with a twist, when our Shlichim (Israeli staff) woke up all of camp by blasting Israeli music and driving around to each village for Yom Israel (Israel Day) programming. It certainly was a week for the memory books! I saw and heard about so many moments, large and small, that our campers celebrated this week.

I had the pleasure of watching a Chalutzim ropes chug (elective activity) this week. Campers, who less than three weeks ago didn’t know each other, supported each other from the ground and up in the air in order to climb to the top of the vertical playground. It was incredibly moving to hear all the campers encourage each other. And perhaps five years from now they’ll be staying up late at night reflecting on their many summers at Camp Wise and look back on this moment as a time that they truly felt a part of something bigger than themselves, just like many of our Solel campers are doing just now.

This is what we do at Camp Wise each summer. And this is what we teach. Teamwork. Friendship. Empathy. Perseverance. And tonight as we head into Shabbat we are reminded that the best kept secret, the magic that keeps Camp Wise moments alive all year, is in the community we build around us. This Shabbat is special because our eldest campers in Solel lead Shabbat alongside their buddies in Chalutzim. Together they’ll read poems and lead camp in blessings, defining for all of us this week’s core value of Clal Yisrael (the Unity of the Jewish People). In preparation for Shabbat the campers discussed what being a part of Clal Yisrael, one community, meant to them.  One of the campers who is here from Israel said he wanted to thank the Americans because he knows that Israel could not exist without our support, much like each village at Wise needs the other.  It was such a powerful moment of real connection, and in these last few days of camp we will see several more with our camp Play, Arts Showcase, and closing CW Night program.

When your children return home next week they will be a bit older, they might be a bit bleached by the sun and their voices will certainly be a bit hoarse from late night cheering, singing, and talking. But they’ll also be a bit more independent, confident, and compassionate. They’ve learned these skills with the assistance of their staff. I know that each member of our community will be returning home soon, but when they do, they will be leaving Camp Wise with memories of moments large and small that they will look back upon until next summer when they return to the Home of Happiness. Thank you for sharing your children with us this summer and I can only hope that they share just a tiny bit of that Camp Wise magic with you!

C1: These guys had an awesome time dressing up in their team colors and cheering as loud as possible for Toy Story Maccabiah. At their cabin activities they really enjoyed shooting bullseyes down at the archery range!

C2: This cabin had a great day of a cabin scramble where they dressed up and switched cabins. One of their favorite parts of the week was the Fun Day Carnival where they played on inflatables, enjoyed cotton candy, and more!

C3: C3 made a splash at their pool party with their Solel buddies and enjoyed cooking treats over a campfire this week. They also went swinging through the trees on the giant swing at the Ropes Course!

C4: C4 has had an awesome week working on their cabin plaque; jet skiing, and so much more. They also had a fantastic time at their first Maccabiah which was an amazing day of cheering and fun! We are looking forward to a great last few days and hope to see everyone back at camp again next summer!

C5: This week the girls of C5 had a great week jet skiing, going on the giant swing, tie dye, and working to prepare for Shabbat with Solel. They are also looking forward to a fun cabin surprise this weekend which they are sure to enjoy. We can’t believe we only have a few more days left. It’s been an amazing session!

C6: The ladies of C6 have been busy preparing for Chalutzim/Solel Shabbat with decoration-making and working on creative writings. They also spent an entire morning down at the lake on the jet skis this week!

C7: C7 had a great time at the Alaska vs. World evening program, especially when they went on the slip n’ slide and played dodgeball with a “bear”! This week they also made their Camp Wise tie dye t-shirts.

C8: At the camp talent show on Saturday night these girls took the stage and showed all of camp just how talented they are! In cabin activities they made their cabin plaque at the art shack and played shot some basketball up on the courts.

O1: O1 made their cabin plaque this week in the art shack and they’re excited to leave their mark on Camp Wise. They also visited radio this week for their cabin activity where they kicked back, relaxed and enjoyed some tunes.

O2: These guys had an unforgettable time when they had a secret after dark giant swing special activity! They also explored their Jewish identity as they became #BlessedwithBess.

O3: O3 had a rip-roaring adventure down at the lake as they spent a morning experiencing the thrills of jet skiing and tubing! They also showed off their stage presence in drama.

O4: While the girls were on their overnight O4 pranked them and tons of fun during Boys Night. Later in the week they learned how to survive the wild in their teva cabin activity!

O5: O5 went crazy at Toy Story Maccabiah as they each helped to retrieve Buzz Lightyear from the evil clutches of Zorg. They also stood out this week, eating a meal on stage in front of all camp!

O6: O6 had an amazing week together! They particularly enjoyed trying out their skills at the climbing tower on the ropes course.

O7: The ladies of O7 had a ton of fun this week! They loved tie dying and making delicious food in their outdoor cooking activities.

O8: O8 had an awesome time cheering on their teams at Toy Story Maccabiah! They also learned some super fun Israeli dances together this week in their cabin activities.

O9: These girls loved their “around the world” overnight this week. They also enjoyed trying out the lily pads on the ropes course!

O10: O10 made amazing tie dyes together this week and they loved shooting bullseyes during archery! They had tons of fun during Toy Story Maccabiah as well.

OT: These ladies tried out so many things this week! They enjoyed jamming out during their guitar activity, mountain biking around camp, and so much more!

N1: N1 had a great week of cabin activities! Their cabin visited so many and basketball, archery and yoga were among their favorites.

N2: These guys visited the zip line for a special night zip and stole their old counselor’s bed for a prank. Among their favorite cabin activities were basketball, dance, horseback riding, and outdoor cooking!

N3: N3 had a blast making their cabin plaque in the art shack this week! They also got sporty with enjoyed archery, teva and tennis.

N4: The men of N4 enjoyed an awesome trip to the vertical playground on the ropes course! They also loved their lake day afternoon where they jet skied on Lake Erie.

N5: N5 had so much fun this week! They conquered the high ropes course and later celebrated Ella and Cadie’s birthdays with late night cheesy fries!

N6: These girls had a great week filled with activities such as a special surprise bonfire with s’mores and music. Additionally, they participated in the cabin activity of guitar where they jammed out to Taylor Swift and a variety of camp songs.

N7: These ladies had chipwiches on Sunday night and bonded over their sweet treat. They also did a song session during rest hour where they played old school songs!

N8: N8 has had an awesome week of bonding, doing various activities including a share-out with the entire cabin. They’ve also been having a blast during Toy Story Maccabiah, some of them even lost our voices from cheering so much!

Solel has had an amazing week! On Sunday morning, we woke the campers up to surprise them with our trip to Buffalo and Niagara Falls. We spent the afternoon at the Buffalo Bison baseball game and spent time after the game exploring Canalside Park. That night, we spent some time playing arcade games and mini golf at Adventure Landing. We spent the night at the Buffalo JCC and had fun using their pool before bed. The next morning, we went to Niagara Falls and finished out the trip playing laser tag and going on water slides at Splash Lagoon! When we got back to camp, it was time for Maccabiah! Solel campers were spirited and energized as they helped lead their teams as role models for the younger campers. We are looking forward to our Solel/Chalutzim Shabbat!