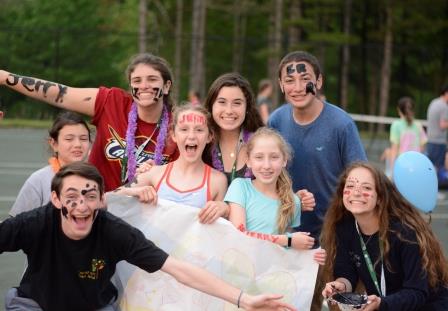 Wow –it has been an unbelievable start to the 2016 summer! The first session campers arrived on Tuesday and brought so much positive energy and ruach (spirit) with them. People often talk about the Camp Wise “Magic” as something that is indescribable and while that’s mostly true, I’ve already witnessed many moments that clearly define the magic you find in everyday moments at Camp Wise. It’s in the moments where one first time camper supports another as they talk about missing home, but know that together they can get through it and learn to love The Home of Happiness. It’s when a camper is encouraged by their cabin cheering from the ground as they reach the top of the climbing tower, and it’s when a long-time camper is recognized for starting and teaching cheers for their village at their nightly closing campfires. There’s been an incredible buzz around camp; campers are singing louder than ever, the sun is shining bright, and our Cleveland Cavaliers are on fire!  Thursday night we brought the Cavs watch party to our own backyard. Campers joined staff and made posters, got their faces painted, and played some basketball of their own. We even provided the opportunity for all of our campers to watch the Cavs destroy the Warriors during a special late-night viewing! Almost all of our campers joined together for the first half of the game which was set up on the big screen in the chadar (dining hall)!

The camp has been transformed for Shabbat. Each week one village leads camp in the Shabbat experience; they spend the week learning about the week’s parsha (Torah portion) and  find ways to connect it to one of Camp Wise’s six core values. Shabbat this week is led by the Noar Village (rising 8th & 9th grade campers) and will focus on the value of Kavanah (spirituality). During the prep sessions the campers discussed what it meant to feel blessed, to be a blessing, and to bless another. Each camper also took a moment to define spirituality for him/herself. Their insights were deep and the thoughts they shared were insightful.  I cannot wait to see the skits, creative writings, decorations, and dance they planned  to help make our first Shabbat of the summer truly wonderful.

With all the excitement here in Chardon, it’s no wonder we’ve had many people ask over the last week if it’s too late to register for camp. We do still have limited space available for second session. In addition there are spaces available in the collaborative overnight programs with the Anisfield Day Camp, Columbus JCC, and Akron JCC. There are also several programs in August designed just for you and your families – Family Camp: August 5-7, Women’s Weekend: August 26-28, and Alumni Camp: September 2-4. For more information visit our website or call the CW office!

C1: The Futons jumped straight into camp with a fun first day packed with horseback riding, archery, and ropes! In addition to already tie-dying their CW t-shirts they also had a day where they all wore different silly hats.

C2: The Chifferobes really enjoyed the Finding Nemo treasure hunt evening program; their favorite part was the giant campfire and s’mores to end the night! They have really enjoyed their time in the sun and around the pool and already played some fun games in the Israel Culture cabin activity.

C3: The Lava Lamps have had a groovy first week of camp. They have already had an opportunity to make a plaque for their cabin and go to low ropes, soccer, giant swing and even outdoor cooking!

C4: The Ottomans haven’t been lounging around with their feet up this week! They have already attended low ropes, soccer, and tie-dye! This cabin is no ordinary foot fest!

C6: The Bunkbeds had a stacked schedule this week; they have already visited low ropes, teva, pottery, and tower. With so much fun happening these bunkbed ladies will be sleeping good at night!

C7: The Stepstools started camp by getting arty and making a plaque for their cabin. They also spent time up in the trees on the giant swing and baked their own brownies in outdoor cooking!

C8: The Waterbeds started camp with sweet treats at their bunk night picnic where they bonded as a cabin. They’ve been hitting the sports on the first few days of camp with activities at archery and tennis.

O1: The Schnitzels have had an incredible first few days of camp. They’ve already climbed to the top of tower on the ropes course and spent a morning at the lake for jet skiing!

O2: O2-Cool have spent their first week going on adventures across camp on horseback, mountain bikes, and jet skis. They also made the biggest twizzler tower in history at Ohalim World Record night!

O3: These guys didn’t waste any time honing their sports skills on the basketball courts and at the archery range. They’ve also traveled to Israel in their Israeli Culture cabin activity!

O4: After an amazing bunk night, the Forests now hold the title in Kung Fu at Ohalim World Record Night. They have clearly established themselves as one of the most spirited cabins in all of camp!

O5: O5-Overdrive had an amazing bunk night and truly showed their teamwork skills on the low ropes course the next day. Camp Wise better get ready to see what these racers can get up to soon!

O6: The “Corndogs” had such a great time during bunk nigh on Tuesday! They have already bonded with each other and during their activities at low ropes, horseback riding, and pottery.

O7: The “Hotdogs” have definitely made a name for themselves throughout camp – especially with their loud cheering in the dining hall! And at their radio activity they enjoyed playing music games.

O8: The “Baked Beans” a special cheer all about beans! One of their favorite cabin activities so far was their time shooting hoops up at basketball!

O9: The “Shish Kabobs” loved their Israeli Dance cabin activity! And during bunk night the girls made special bracelets that each of them are wearing.

O10: The “Burgers” already had the chance to tear up the lake with a morning of jet skiing! They’ve also worked to create their own unique cheers about burgers that everyone in the village is singing as well.

N1: These guys shared lots of laughs at their drama cabin activity this week playing a series of improve games. They’ve already had late night story time and cheering from one bunk to the next before going to sleep each night!

N3: Basketball was the name of the game until the basketball started to be used as a football. The men in N3 also spent some time down at archery where there were multiple bullseyes by the group!

N4: At Noar’s Let’s Grow Up evening program this cabin performed a hilarious skit. As the oldest in the village, this cabin has taken a lead on teaching cheers at the closing campfires!

N5: While at tie-dye these ladies demonstrated creativity and teamwork as they worked together to learn new ways to design their shirts. They’ve also really enjoyed late night card games in the cabin!

N6: These girls are enjoying the special moments like playing a game called “roses and buds” where each camper appreciated one another and shared what they’re looking forward to this summer! In their cabin activities they went on an adventure in mountain biking.

N7: The N7 ladies demonstrated great sportsmanship and enthusiasm at their cabin’s basketball activity this week! They’ve shared lots of laughs in the cabin playing cards as well.

N8: These girls used their magic forces to make sure the rain didn’t keep them from jet skiing down at the lake. They’ve also learned a new “stomp” dance as a part of their dance cabin activity!

Solel has had a great first week! The village has begun to bond and become a true Solel family. The campers worked on building trust amongst each other at their low ropes activities by completed different challenges. Then on Thursday morning Solel left for their first trip of the session. At Ohiopyle (actually in Pennsylvania) the campers took the rapids by storm, it was literally pouring rain at the end (doesn’t worry everyone got off the river safely and back to the campsite)! After a delicious cookout dinner they went to bed to prepare for a morning of mountain biking and a tour at Frank Lloyd Wright’s Falling Water.