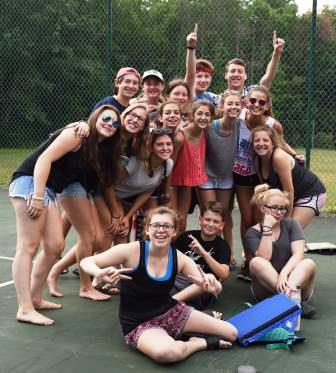 Trip II 2016 has begun and we certainly had a memorable start! When the 350 campers stepped off the bus on Wednesday afternoon camp was enveloped by the sounds of children and staff reuniting, cheering, and of course loads of singing. In just a few short days I’ve had the opportunity to see just how exceptional our Camp Wise community truly is. Ohalim showed me how much fun they can have when an unexpected late night turned into a song session dance party. I joined in on Noar’s closing campfire ritual and got a chance to hang out with Solel campers on the deck. In Chalutzim, I watched as campers who had arrived just two days before welcomed our special Shabbat guests from the Columbus JCC. Together with their staff, the Chalutzim campers helped teach the campers from Columbus about the ruach (spirit) of Chalutzim and Camp Wise.

In this week’s parsha (torah portion) we remember when God asked something of Moses and Moses reacted in anger. Life requires us to pause and think before we either act or speak. These moments of pause, are called kavanah (intentional spirituality), and fittingly kavanah was the core value we concentrated on this week and this Shabbat. As Shabbat came to a close, I was inspired by the campers of Noar who assisted in leading our services this weekend where returning campers, first-time campers, and campers from as far away as Israel, stood up in front of all of camp to read torah and share their thoughts about camp with their creative writings.

Saturdays at Camp Wise are always a special day. After our floating (not on the lake) late breakfast and a beautiful morning service, our campers rocked out to their first concert and dance party of the day at Saturday lunch. Following a relaxing afternoon of chofesh (free time), we joined together once again for a special performance from the Israeli Scouts Friendship Caravan. Each year the Caravan tours the country, stopping at summer camps and community centers along the way, but we know that Camp Wise is their favorite stop!

I am looking forward to starting a new week at camp filled with special programming, trips, and meeting more new campers. As we say goodbye to our Columbus Shabbat campers, we are thrilled to have many of them extend their time in camp. Throughout this week we will be joined by more first-time campers. Read below to learn more about their experience and some highlights from each cabin.

There are more opportunities for you and your family to get a taste of Camp Wise including Family Camp (August 5-7), Women’s Weekend (August 26-28), and Alumni Camp (September 2-4). During Family Camp, families will stay in cabins together and activities are designed for you to have fun together as a family.  There’s also special kids-only programming during the day and late-night excitement for parents while kids hang out with camp counselors.

PS – Friends and family in Cleveland can see the Israeli Scouts Concert on Monday evening at the Mandel JCC. Click here to find out more and to RSVP!

In their short time at camp these campers truly got to experience the best that Camp Wise has to offer. Highlights include jet skiing at the lake, making their very own Camp Wise tie dye t-shirt, a late night swim, giant swing on the ropes course, horseback riding in the arena, and s’mores over the campfire!

C1: Tasmania has settled in to camp right away. They had a great time shooting hoops at basketball and even spent an entire morning at the lake for jet skiing!

C2: These guys loved meeting their Solel buddies on Saturday afternoon where they bonded during group games. They enjoyed making cookies over the campfire at the outdoor cooking cabin activity!

C3: The men of C3 loved their first Shabbat of the summer, especially their free time during chofesh. Their favorite cabin activity this week was archery were bullseyes were shot all around!

C6: The girls of C6 enjoyed their ceramics activity where they learned how to make their own pots using the pottery wheel. They also had a lot of fun Friday night during spirit circle and danced all over the chadar during the Saturday afternoon dance party.

C7: These ladies started their session with some group bonding and initiatives on the CW low ropes course. While at the pool for free swim they’ve especially enjoyed the waterslides and beach volleyball court!

C8: C8 loved their bunk night activities where they got to know each other better and learned fun facts about each other. Their favorite time so far was their Chalutzim evening program on Thursday night filled with silly games, artwork, and lots of candy!

O1: The Titanium had an incredible week of relationship building and cabin bonding on the low ropes course. They also got to show off their skills on the basketball courts!

O2: The men of the O2 Moles solved the mystery of the bum-fuzzle-tiddle-didi during Ohalim’s evening program on Thursday. As a cabin they explored the depths of the Camp Wise “jungle” in their teva activity!

O3: These campers took their cabin theme to a whole new level, educating all of camp about the dangers of global warming with a series of hysterical songs and skits! They are already one of the loudest cabins in Camp Wise history.

O4: These guys made their mark on camp on the first day as they created their cabin plaque. They’ve also already traveled to Israel, learning more about the culture and even learning an Israeli dance!

O5: The Science Guys had an incredible bunk night where they learnt all about camp and each other. They also got a taste of adventure this week during the mountain biking activity!

O6: O6 had a great week getting to know each other! They made awesome tie dye t-shirts and absolutely loving camp.

O7: This cabin has an incredible bond already. The girls loved playing soccer together and shot tons of bullseyes down at archery!

O8: The Bunsen Burners have had an awesome first week! They’ve been working on planning a hilarious prank on their counselors but shhhhhhhh…it’s a secret – wait until next week for more information.

O9: The ladies of O9 had so much fun trying out new things around camp. They especially enjoyed their team-building activities during low ropes.

O10: This cabin’s identity is amazing and their spirit in the dining hall is insane! The O10 tongs loved yoga, low ropes, and spending time together as a cabin.

N1: N1 has had lots of chill time together. They started the session getting crafty making their cabin plaque and tie dying the CW t-shirts!

N2: These guys have had lots of late night bonding since the beginning of the session! You can always find them hanging out in the middle of the village playing cards, listening to music, and tossing a ball around.

N3: The men of N3 bonded playing during games of Frisbee. It’s really special to have campers from Israel in the cabin and they’ve even been teaching Hebrew to their cabin mates!

N4: This week has already been packed with fun activities like tennis, yoga and pottery. And these guys have already had a special late night activity with pizza and French fries.

N5: These girls have been all about adventure. Their cabin enjoyed team building activities on low ropes course and enjoyed mountain biking throughout camp!

N6: The ladies of N6 learned a song in Bess’s new Live Wise cabin activity. They also had a ton of fun celebrating their counselor Alyse’s birthday on Friday!

N7: This cabin has been focused on bonding together. They have been doing an activity called the compliment bottle every night in the cabin and even created name art to decorate the cabin!

N8: Watch out Shark Tank because these young ladies are ready to take their Crazy River product, developed in Noar’s own shark tank, to television! They also enjoyed a special cabin party during chofesh.

Solel Trip II has started off strong! On the first full day of camp, the campers were split into four different groups, mixing up their usual cabins for cabin activity. Groups 1 and 2 enjoyed a sunny morning at the lake doing Jet Ski, while groups 3 and 4 came together at Low Ropes, working on their teambuilding and communication skills. We’ve been spending plenty of time enjoying the Solel deck and getting to know each other around nightly campfires. All of the campers are coming together to form a very special Solel community. We’re all looking forward to our first trip coming up soon!